Live Action was suspended from the short-form video app TikTok on Jan. 30, 2020, after posting a video with the captions: “Be pro-abortion” or “Be pro-life and help save babies.” Following a popular TikTok trend, the video shows a young woman eating a jelly bean next to the pro-life caption.

My team grew the largest pro-life voice on the platform

This is the video that TikTok says violated their “Community Guidelines” and banned us for.

In it, we share the beautiful personal stories that some of our followers have shared with us about choosing life for their babies. 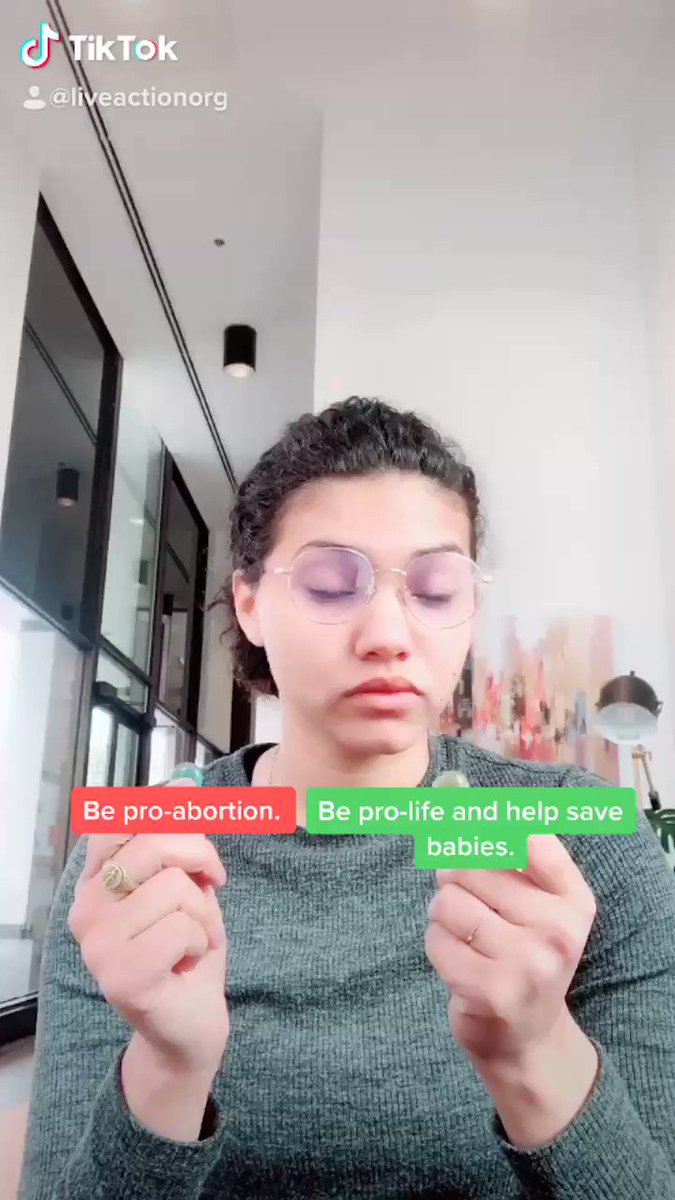 3,173 people are talking about this

According to TikTok, this video, which also included pictures of smiling infants, violated “multiple Community Guidelines.” Within 24 hours, TikTok apologized and reinstated the account, citing “human error.” TikTok never told Live Action which guidelines it suspected us of violating.

The initial decision to remove our video of smiling babies was even more confusing, since TikTok appears to be fine with videos that simulate harm to children, including one video of a young man violently beating a realistic-looking baby doll against a desk, laughing and calling it a “DIY” abortion as the doll flails. That video, which currently has almost 1.2 million views, 120,000 likes, and more than 2,000 comments, uses the hashtag “#plannedparenthood.” Another shocking TikTok video shows a young man “explaining to the boys how to conduct a coat hanger abortion in the garage,” waving a coat hanger and joking that it “just works.”

TikTok’s community guidelines prohibit “violent and graphic” content, including videos that are “gratuitously shocking, sadistic, or excessively graphic,” or which depict “severe physical violence,” yet neither of these videos has been removed.

The popularity of the Beijing-based social media platform has exploded among the next generation in the United States, with 41 percent of its more than 800 million users between the ages of 16 and 24. Live Action is a nonprofit pro-life organization that advocates for the human rights and dignity of preborn children, and seeks to expose the fraudulent and dangerous practices of the abortion industry.

One of the key audiences for Live Action’s life-saving message is young, pregnant women who are considering abortion. At the time of its removal, and now with its account reinstated, Live Action has become the largest pro-life voice on TikTok with more than 21,000 followers.

This is not Live Action’s first encounter with Big Tech censorship on social media. In 2015, Twitter banned Live Action and my personal account from running paid advertisements, pointing to our use of ultrasound images, criticism of abortion facilities, and fight to end their taxpayer funding. Twitter told us we needed to remove all our “secret recordings” and “sensitive content,” which included ultrasound images of preborn children and quotes such as, “A person’s a person no matter how small,” from both our Twitter feeds and scrub them from our website if we wanted to continue advertising.

Incredibly, although the “secret recordings” we shared exposed Planned Parenthood officials engaging in trafficking body parts of aborted babies, the company and its lobbying arm continue to run paid ads on Twitter.

In 2018, YouTube demonetized Live Action and banned our paid ads. In June 2019, Pinterest banned and removed Live Action after a whistleblower employee exposed the platform’s decision to place Live Action on its blocked “pornography” list. Also in 2019, Facebook’s partner “fact-checkers” deemed Live Action content “false” for saying abortion is not medically necessary, a position shared by thousands of board-certified OB-GYNs.

Whether we like it or not, social media has become America’s town square. We go there for news, information, and public debate. Platforms such as Facebook and Twitter represent themselves as open forums. The Supreme Court has even called social media the “modern public square,” and lower federal courts are now telling public officials that blocking their social media critics is “viewpoint discrimination” that violates the First Amendment. Former Twitter CEO Dick Costolo personally called the platform the “global town square.”

But these companies openly engage in viewpoint discrimination, which, if done by government entities in the traditional “town squares” of America, would be brazenly unconstitutional. Big Tech routinely steps into the abortion debate, censors the pro-life side, favors the pro-abortion side, and then laughably claims to be enforcing neutral policies.

Just last year, Twitter restricted an image of the late Nobel Prize-winner Mother Theresa, posted by the president of Susan B. Anthony List. The image included a quote that supposedly violated Twitter’s “health and pharmaceutical products and services policy.” The quote read, “Abortion is profoundly anti-woman. Three quarters of its victims are women: Half the babies and all the mothers.”

Absurd as it is to claim decisions like this are neutral, Silicon Valley’s escape hatch is that these companies are private corporations, not government entities. Therefore, the First Amendment does not apply to their enforcement of their rules.

What Should We Do About Censorship?

But with these companies acting as gatekeepers to news and information, operating under clear biases against organizations such as Live Action, is our digital town square truly a forum for free speech and open debate?

Some argue that social media companies censoring conservative and pro-life organizations should be held to the same standards as other news publications exercising editorial decisions. If I can sue the New York Times for defamation, perhaps the same liability should apply to Facebook for every post it decides not to censor.

Others have wondered if social media companies should be treated like public utilities and therefore essential public services the federal government can regulate and break up. Perhaps the Federal Communications Commission needs to check their unfair, deceptive, and anticompetitive practices, just like it does with broadcast media companies and electricity providers.

It is also worth mentioning the Supreme Court upheld California’s ability to expand free speech protections to citizens who picket and demonstrate in privately owned shopping centers, deemed “public forums” in California. Where is Silicon Valley located again?

What about TikTok? The app is owned by a Beijing-based company subject to Chinese government censorship policies, not U.S. constitutional free speech rights. The company, ByteDance, has been caught repeatedly censoring political content globally.

As if the titans of Silicon Valley were not bad enough, should we now be concerned that some corners of our global town square will be subject to the censorship policies of an authoritarian regime? If so, don’t expect pro-lifers to be welcomed in those corners, monitored by the same government that enforced a brutal one-child policy and untold millions of forced abortions, primarily targeting female babies. No wonder TikTok has not flagged or removed “DIY” abortion videos.

Is that the brave, new global town square we want? Or maybe, since TikTok has servers and headquarters located in the United States, it should be no easier for the platform to get away with censorship than it should be for Silicon Valley.

Whatever we decide as a representative republic, these looming questions are ripe for debate now that social media has become our undisputed public square. As Americans, we must demand that Big Tech respect our rights to free speech and open debate.

Lila Rose is the founder and president of the national pro-life organization Live Action. Follow her on Twitter: @LilaGraceRose.